As this overall shitty year wraps up, it was easy for us to feel like 2016 in terms of our live music adventures was equally shitty. However, while writing this, it is clear that it was anything but.

Best We Actually Paid For These Tickets

Aub (Modest Mouse @ Iroquois Amphitheater) – This early spring Iroquois show was a magnificent start to the season at our favorite outdoor amphitheater. Modest Mouse wowed at Forecastle the year before, and this full set was highly anticipated.

Britt (Ray LaMontagne @ The Palace) – I missed Ray at Forecastle a couple of years ago and I was so happy he returned to The Palace. I could listen to the man sing for hours on end and not be disappointed. PLUS, members from MMJ were backing the man. It was pretty incredible. 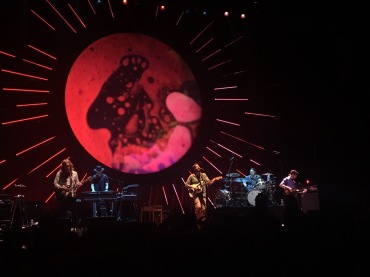 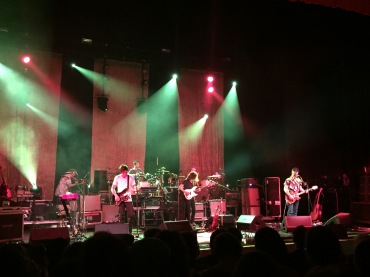 Aub (July & November) – I agree with Britt (see below), that lineup alone was enough to keep us away from a chance at seeing Coldplay. The weather shortened the evening, unfortunately. We’ve seen Brett before and Lucius was coming back for Halloween (so much fun) but I definitely need some more time with Kaleo. I also LOVED Adia Victoria’s Winter Wednesday show. It was entertaining how many of the older folks that attend these shows were so uncomfortable by her style, whereas we sat there in complete awe.

Britt (July) – The Brett Dennen/Lucius/Kaleo Waterfont Wednesday was ON POINT. We ended up with some pretty sick waterfront photos because of the crazy storms passing through, and though the weather sort of messed with the sets, all three were amazing.

Aub (The Struts @ Mercury) – The Struts lived up to the mfing hype. My goodness. I’m SOOOOOO glad that I asked to take photos for this one. Luke is such a presence on the stage, it is impossible not to feel the happiness that he has while performing. It was one of those photo moments where I was beaming the entire time.

Britt (Brandi Carlile @ Forecastle) – Brandi Carlile at Forecastle was by far one of the most fun sets to take pictures of, hands down. I don’t think she stopped smiling once. The woman is so passionate about her music, and that intensity is so perfect for photos. 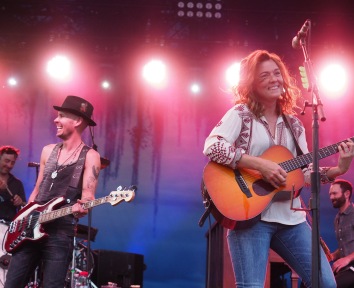 Aub (Unknown Mortal Orchestra & Brandi Carlile) – Forecastle was a little weird for me this year. I was exhausted after having been at camp for two weeks; I was emotionally, physically and mentally exhausted already. That being said, I very much enjoyed Unknown Mortal Orchestra. I woke up singing “So Good At Being In Trouble” the morning of their set. I must have a sixth sense or something. Brandi Carlile also made exhausted me weep like a baby, so that also must be mentioned.

Britt (Alabama Shakes & Teddy Abrams & Friends) – Being up in Brittany Howard’s personal space was an incredible thing. I could feel the power and grace emanating from the mic. On a different level, Teddy’s set was also incredible. He continued doing what he does best – highlighting all of the fantastic music that our city is producing – by bringing out so many guest musicians on stage. 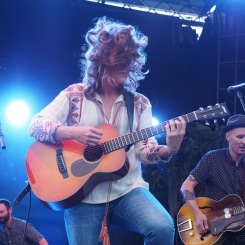 Britt (Seven Sense Fest) – We always have a blast on Preston at Seven Sense. The weather is still beautiful, the music is loud and fun. Alanna Royale absolutely killed it, and Low Cut Connie and Dylan LeBlanc both rounded out the evening nicely.

Aub – We made the pilgrimage to several now annual festivals this year, and each provided what I have come to expect and love. I can’t really pick a single festival as the best of the year, because each included checking off some bucket list shows (Florence and the Machine at Shaky Knees, Death Cab For Cutie at Forecastle, Del McCoury at Romp, LCD Soundsystem at Lou Fest, etc…).

Britt (Shaky Knees Music Festival) – I love the 502, but how can you deny that Shaky Knees lineup this year?! I was up front when Shakey Graves’ sound wasn’t working so I was there for the beautiful acoustic serenade. We also got to see Jim James/My Morning Jacket several nights in a row. And Florence. I can die in peace now. 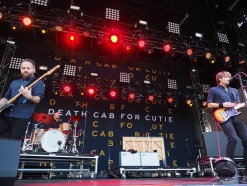 Best Out of Town Show

Aub (Middle Waves Music Festival) – It was part of the inaugural Middle Waves Festival in my hometown of Fort Wayne, IN, but seeing the Flaming Lips with my conservative parents was a treat. We took pit photos of Wayne Coyne with fuzzy balls glued to his crotch, and got to be part of the first year of something that hopefully continues in this up-and-coming city! 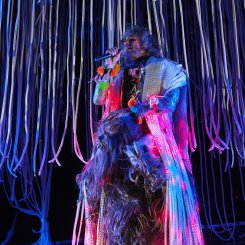 Aub (Dave Moisan) – Everyone met Dave Moisan this year, but were technically part of that crew before it was cool. We got to hear his quickly released album before his Voice showcase. Heavyweight is catchy AF. We weren’t at the official release show, but I think word is out that he is the man. 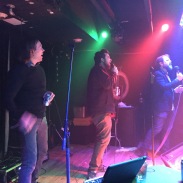 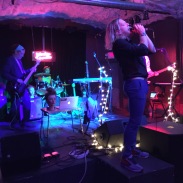 Best Venue for a Live Show

Aub (Iroquois Amphitheater) – I’m going with Iroquois this year. It felt like we were out at Iroquois park on a weekly basis for some big time shows. Ditto with Britt below, outdoor shows are magical.

Britt (Louisville Waterfront) – I might have to go with the Waterfront on this one this year. While the acoustics down there aren’t the greatest, we saw some epic shows there – Waterfront Wednesdays, Forecastle, The Lumineers, GonzoFest – and there’s something a little special about experiencing shows outdoors. 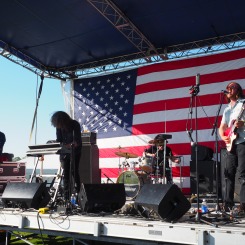 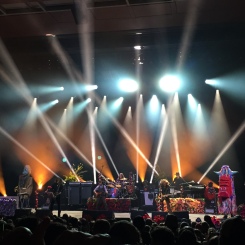 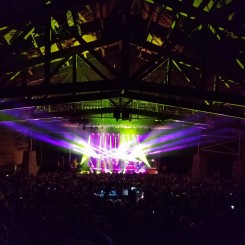 Aub (Anders Osborne @ Headliners) – Anders Osborne was a show I don’t think I was fully prepared for. And when he played “I’m Ready” (he said it had been a while, although he could be lying) it was a-mazing.

Britt (Shakey Graves @ Shaky Knees) – I know I mentioned this already, but it gave me all of the chills. The sound was entirely not working as Shakey was supposed to be going on. After several minutes of waiting around, he decided to play an acoustic “Dearly Departed.” LEGIT I still get chills thinking about it. 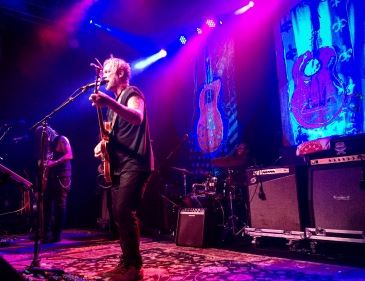 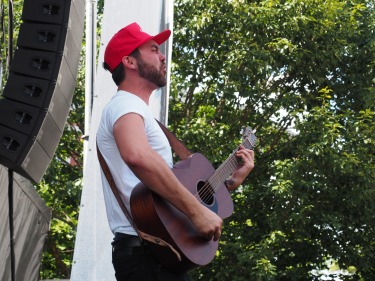 Best Takes Me Back Show

Aub (Miike Snow @ Headliners & Passion Pit @ Mercury) – Miike Snow made it’s way onto my iTunes sometime in the early 2010’s and I hadn’t really made any attempts at listening to newer stuff before this show. Poor move on my part, but their Headliners show got me drawn in once again. Passion Pit at Mercury was another one like this. Michael Angelakos is impressive and let me reminisce.

Britt (Jimmy Eat World @ Mercury) – JIMMY. EAT. WORLD. WAS. SO. WONDERFUL. This was the second time I’ve seen them (first was opening for Green Day in 2005), but 10 years later I have so much more appreciation for the band. 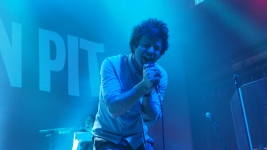 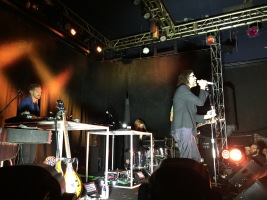 Aub (John Paul White @ Headliners & Jim James @ The Palace) – I’m going with my Thanksgiving break run of John Paul White and Jim James. I’m going to ignore the technicality that I brought my parents with me to Yim. Anywho, both shows were such that I honestly didn’t care who I was standing/sitting next to. The two men were both that impressive in their own individual ways.

Britt (Cage the Elephant @ Yum!) – Aubrey had just left for Sweden when Twin Peaks & Portugal. The Man opened up for Cage the Elephant. I wasn’t sure how the Yum! Center was going to be for a venue, and it was probably bigger than what was needed for the show, but all three bands totally rocked the stage. And I will never forget Matt Shultz’ white skinny jeans. Someone bring me a fan, please. 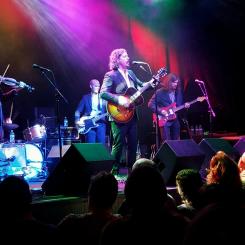 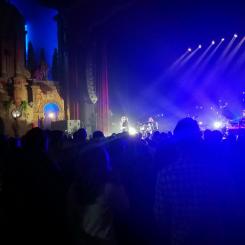 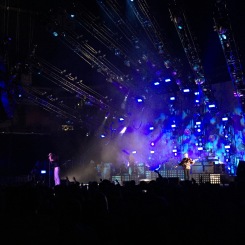 Aub (Anderson .Paak @ Lou Fest) – We missed Anderson .Paak when he came to the Mercury Ballroom, so his set at Lou Fest was a must see. I was not let down. Paak is an unbelievable performer with insane energy and charisma. The entire crowd was so tuned in with his every move.

Britt (Sylvan Esso @ Forecastle) – There weren’t too many ‘vibey’ shows this year, but I think Sylvan Esso at Forecastle qualifies. The NC duo owned the Ocean Stage and the crowd followed suit. 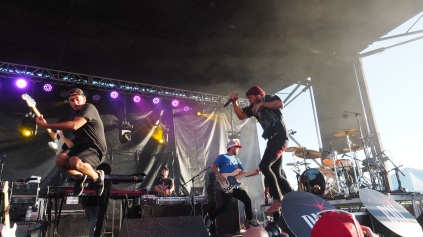 Aub (Joseph @ Headliners) – As much as we’ve heard and read about Joseph, I thought there would be a bigger crowd at their Headliners show, but I don’t think it mattered. The sisters were there to gain some fans in a new city and definitely accomplished that.

Britt (Eliot Sumner @ New Vintage) – We convinced a few friends to come with us to see Eliot Sumner (Sting’s second youngest child) and no one was disappointed. It wasn’t the smallest crowd, but also not the largest. I think everyone was genuinely super impressed. Plus there’s some nostalgia, thinking back now, as The New Vintage is in its final days. 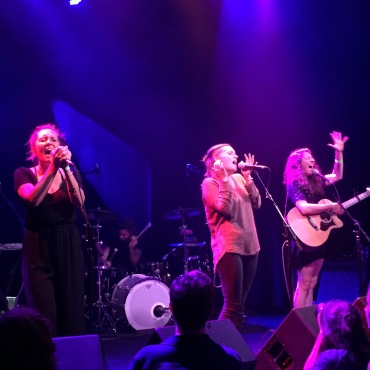 Britt (Savages @ Mercury) – Sorry if I stole this one from you, Aubrey, but it was a fantastic show. We had heard a lot of hype about Savages after their performance at Shaky Knees, and the band didn’t disappoint at their Mercury show. 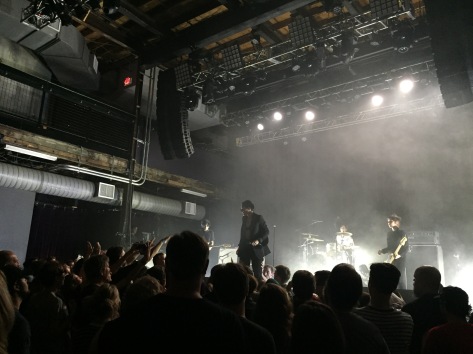 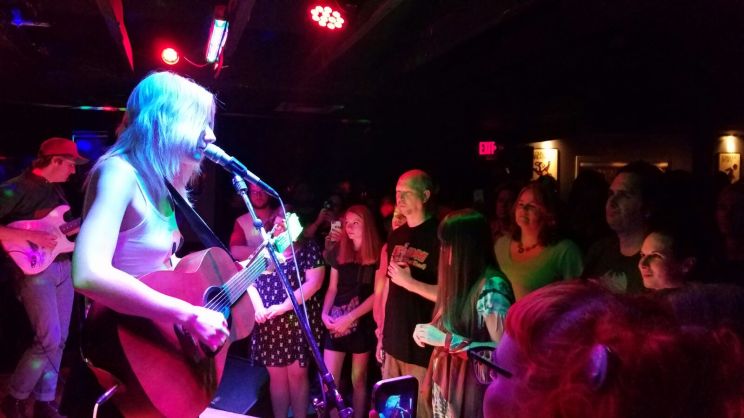 So even though there were some major downers in 2016, we can celebrate the good music we listened to and the incredible performances we experienced, and raise our glasses to an even better new year.