Stating the obvious, this show happened a while ago. Rather than just scraping it, though, I felt some words needed to be shared about my Anders Osborne experience a few weeks back.

Now let me set the stage for our evening at Headliners. We had an epic week of shows. It was the last full week before school started, but we were at our respective school buildings each day preparing for our kiddos. Emotions were running high. Ray Lamontagne and his heavily Louisville influenced Palace show got things started. Ray’s newest work was produced by Kevin Ratterman and his backing band was My Morning Jacket sans Jim James. His philosophical look on music, experimentation and growth was inspiring to say the least: “I don’t know anything about music and I hope I’m always that way because it allows me to approach it… excited and curious like a little kid. It’s just play.” The next evening we were once again knocked on our asses by Lake Street Dive at Iroquois Amphitheater.  Rachel Price induced chills are a given, but their entire show was next level. They are a fun group that exudes that joy to every crowd they play for. Needless to say, it had been a pretty great two day run.

Evening three we rolled into Headliners honestly a little worn out. On the bill was Anders Osborne, an artist that I only truly know on a surface level. Clearly, I was not mentally prepared for what I was about to witness.

The show reminded me of our early Live Music Lou days, where we would win tickets or buy them on a whim to see an artist that we knew little more than a song or two from. Some examples of this were sold out Jason Isbell and Jake Bugg shows, where we trusted our limited exposure and were blown away by what we saw.

The Headliners crowd was by no means the largest we’ve ever seen or even seen in the past month (dude, so many people at Beach House.) That however did not stop those in attendance from matching the exuberance on the stage. Mirroring Osborne and his three compadres playing with him, the crowd of mostly middle aged men were caught up in the music. Brittany was moved by a man in front of us as an inspiration- he was doing whatever the fuck he wanted, dancing and enjoying himself however he damn well pleased. “Life goals,” Brittany said. The free spirited Swede brought it out of all of us, I think. He was not phased by the smaller crowd, but instead appreciated and played the hell out of his set. They three musicians playing guitar/bass not only created some sonic beauty, but did so on gorgeous guitars. It all was too much… I couldn’t stop grinning.

I came into the evening not really knowing what to expect, my tank a little drained. I left rejuvenated and ready to take on the world. In the encore he played “I’m Ready,” from his 2013 album Peace, which is one of the few songs I could actually name by Osborne. He said he hadn’t played it in a while, and goodness that got my hyped. It is a song that I play on school days where I need a little bit of a pick-me-up to get through, and it was exactly what I needed to hear in preparation for the upcoming school year. PRAISE HANDS ANDERS.  🙌 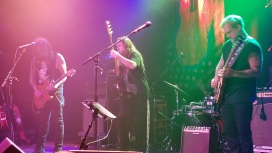 For real, for real, this has probably been my favorite three day stretch of 2016 so far. I know September is about to be pretty epic, but this will be hard to top.