We love it when local artists (now friends) have new music to share with us. We especially love it when they throw a party to showcase their stuff and invite us. Free Soul Effect, if you haven’t heard, combines the immense talents of two faces you probably see a lot around the music scene in town: Kojin Tashiro and Ryan Marsh. Their new album, Of Random Unison, is available now. They’re celebrating the release at Zanzabar. We will be there, you should be there, too! (Get your tickets here!) 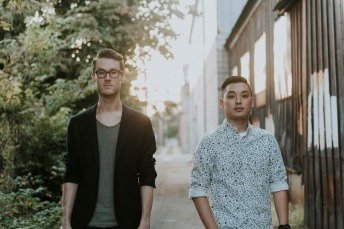 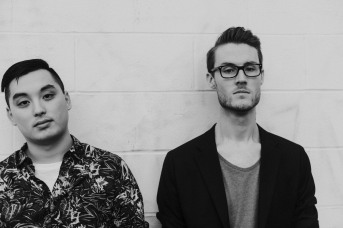 Preview the album and check out our tipsy commentary as we listened through Of Random Unison for the first time. In its entirety, the album definitely has a story line. Each song fits together but is dynamically different from the others. Ryan and Kojin highlight their individual expertise and use their friends to further develop their vision. Aka we dig it.

Brittany: Is this what I saw on Wave3 today with Dawn Gee? It’s super catchy, Ryan’s voice + Kojin’s beats are sounding 🔥. I mean, this sounds like a pop hit today.

Aubrey:  Ooh here we go! So I think I’m watching a initial eyeball connection at the club and it isn’t awkward AF or messy AF, which is kind of refreshing… or unrealistic?

Britt: This is how we all want our summer days to be, amirite?

Aub: Eons D? Yons? Is that you? I’m slightly confused and will scourge the internet later for information. The collabs on this record show Kojin and Ryan have some talented friends in their corner.

Britt: Or maybe it was this one that I saw today… I’m curious, are we talking about the same girl in all of these songs? She’s getting a lot of attention.

Aub: Yesyesyesyes falsetto. I don’t know if I’ve ever been referred to as “sugar baby” but like I get it, it’d be flattering.

Britt: Ryan, how often do you need to drink all of the herbal tea to soothe your throat from singing so high? Just thinking about doing that makes me cough. This album release show is happening at Z and I feel like I could imagine GlitterTitz taking ahold of some of these songs and playing them (in his own way) at a Saturday night dance partay.

Side note: check out the acoustic version of this one before scrolling down for the rest:

Aub: This has a more mature, casual sound… less of the pressure of a club meet up, or like that summer love… ya feel me?

Britt: Love me some Otis Junior. This will be a good pairing, for sure. Are we going to get some harmonizing? Alas, not really, but I sat here and tapped my foot/swayed back and forth the whole time and feel like I enjoyed it.

Britt: Sen. Shu. Al. But like, are you really incompatible? It *sounds* like you are. But the words are saying different things. Idk, maybe it’s the wine talking.

Aub: Okay now we are getting sexual with this little groove. This is real nonchalant and also simultaneously complicated… A lot for me to grapple with right now but also real life.

“Get Away (feat. Chelle Lynae)”

Britt: We started out this album being all lovey dovey and the mood has definitely changed. Again, is this the same lady we’ve been singing about? Sounds like she’s doing okay.

Aub: Thank you for bringing the female perspective in, gents.

“No One Has to Know”

Aub: Now we are sneaking around?! I mean that is fun and all but like ya’ll seem very adamant about it.

“Off the Ground (feat. Brooks Ritter)”

Britt: Not gonna lie, it’s a little weird for me that Brooks Ritter is doing something other than singing to me sweetly with his acoustic guitar and plaid shirt. But he does have a nice voice, so we can let it slide this time.

Aub: Dude disagree, I like Brook Ritter’s voice on a R&B/pop track a whole freaking lot. I didn’t know this was what I wanted but I do. Props for making this happen for me.

Britt: Also, back to the overall storyline – so it was honeymoon phase, then we had to break up, and now it’s on to a rebound? Or back with the same woman? It’s unclear.

Britt: This makes me think you want to get back with ol’ girl. Either that, or you fall real hard, real fast. This one is a little boy-band-y.

Aub: Okay, being so upfront. I mean ya’ll gotta close out this story like this though. Happy endings for all.

Aub: I’m not sure how I feel about all the questions and insecurity to finish this off. After all that happiness, now we are left broken hearted. Ruthless.