We are headed to Lexington for the fourth annual MoonTower Music Festival. We were at year 2, which featured Moon Taxi, The Weeks, The Apache Relay (RIP), Ben Sollee among others. It was a lovely, intimate festival at Masterson Station Park, right outside downtown. The dog-friendly event hosted a range of people, all there to enjoy the fall(ish) weather, craft beer, and gourmet food as well as a deliberately-crafted lineup. We expect a similar experience this go around.

We are bringing our special associate, Beaver, to enjoy the day with us. I’ve read there are dueling beer gardens hosted by Rhinegeist and West Sixth, as well as wine and bourbon bars. And all the food is locally owned and raised aka the best. It is setting up to be a spectacular day.

The single-day festival may not have the quantity of bands as some of the other bigger regional fests, but the quality is certainly there. We’ve selected a few of our top picks!

Watching these guys close out the festival, with their lights and jams, sounds like a flawless way to spend a late-summer night. The couple of times we’ve seen Umphrey’s in a festival setting (which seems like the best setting) it was the afternoon or early evening aka it was still light out. That doesn’t do them justice. This will. Get ready Lex.

We are so so so so so hyped about finally seeing Benjamin Booker. He is a staple on WFPK and tbh his recent song with Mavis Staples gives me life. That being said, for some reason, we have always missed him for some reason. That all changes here.

We missed out on our yearly bluegrass fill since neither of us were able to be at ROMP, so luckily The Travelin’ McCourys will be able to satiate us. Their late-afternoon set time will give you a chance to recharge and get ready for the rest of the night.

LA boys in a KY town. They were up for a Grammy last year, only losing to Fantastic Negrito (absolutely nothing to be ashamed about there) so they are good at what they do. With only one album released, fingers are crossed that we get to hear some new stuff. They’re due.

We interviewed this band, particularly Zack the drummer, and they sound like some down to earth Nashville blokes. They like dogs, watched the eclipse and have great taste in music (besides their own.)

Apparently it is impossible to get in contact with this man. Childers is returning to his former home and it appears people are pretty excited about it. Make it a point to be here for this early afternoon set with this soulful Appalachian man. He may be young, but he has garnered a reputation among people who mean something in Nashville. That’s good enough for me.

Check out the rest of the lineup below, and hope to see you out at the park! 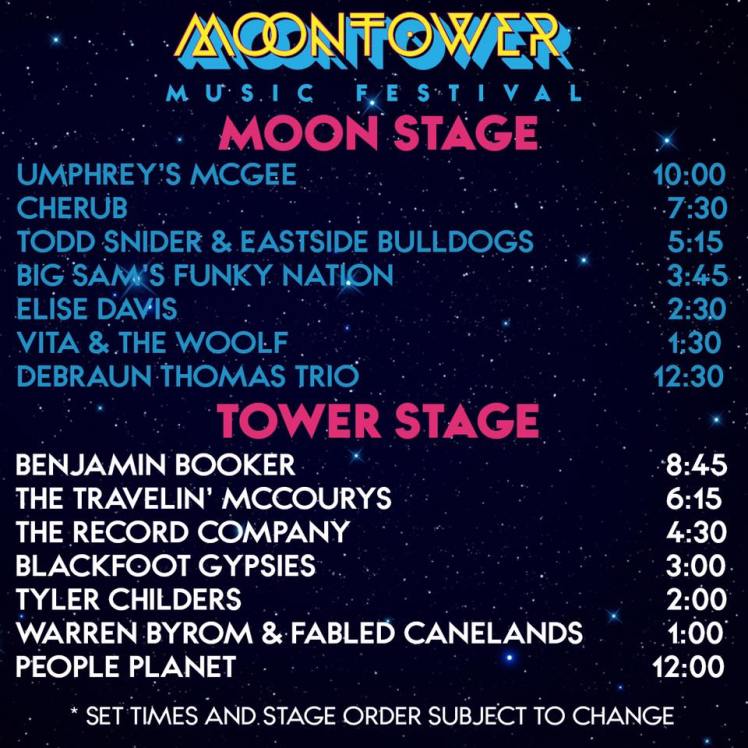 One thought on “MoonTower 4.0 Preview”