Bunbury has been a festival that we’ve wanted to check out over the last few years, but there has always been other conflicts. Case in point, Aubrey was home for her brother’s graduation, but luckily I was able to head up 71 for a little solo festing action. Unfortunately, I had to miss Friday’s sets – and I hear Wiz Khalifa was FANTASTIC – but was able to be there Saturday and Sunday. Here are a few highlights from the weekend.

EDM is not my thing, but I get why people like it.

The crowd was HYPED for Bassnectar, photographers included (being there solo meant lots of time for eavesdropping on conversations). And as far as I could tell, I think that Lorin Ashton met their expectations. I’ve been to my fair share of shows, but Bassnectar was on another level – the bass was so loud it made breathing a struggle and I think some people genuinely got concussed from headbanging so hard. It was certainly an experience, which is why I assume the EDM following has taken off. Ultimately, it’s not my favorite, but I can appreciate why so many love it.

Sundays are still the best days.

Aubrey’s theory that Sundays are always the best festival days turned out to be true yet again. I had a bomb ass breakfast burger at Taste of Belgium before heading over to the festival, which was a killer decision. I rocked out with White Reaper first…but like why was there no moshing, Cincinnati?! Also, got the chance to catch a full Arkells set, and that may have been a favorite of the weekend. I envy the amount of energy and enthusiasm that Max Kerman is able to put into every performance. As always, Moon Taxi was perfect for that late-afternoon shoulder dance. We had a couple of throwbacks with AFI and Thirty Seconds to Mars before the teens swarmed to see The 1975. And then the festival closed out with Muse, which I was only able to catch a couple of songs of before hitting the road back to Louisville, but I was left with a strong desire to see them again.

Why do photographers need escorts?

I was told it’s a PromoWest thing to have photo escorts instead of having easily accessible photo pit entrances. I understand the reasoning, but the execution really wasn’t great. For instance, when Jon Bellion was having major technical issues and we ended up sweltering in the sun for an extra 30+ minutes, we were all missing out on a pretty epic AFI set. Maybe LML is in the minority of photographers because we want to enjoy the music, too, but for real…the escorting was too much.

The lineup ended up surprising me for the better.

Don’t get me wrong, I was excited for the festival, but I wasn’t over the moon. But a few sets in particular stood out as positive surprises.

Hayley Kiyoko – After briefly listening to her recorded stuff, I was expecting a typical poppy set. I was pleasantly surprised by the mostly female band and Hayley’s overall badass vibes.

Tech N9ne – The dude came out on stage solo – like literally nothing else on stage besides himself and a Tech N9ne banner – and killed it.

Watsky – How we were in the dark about him before now, I’m not sure, but I’m on board now. The rapper has some serious talent.

Muse – Okay, this one wasn’t a surprise, but I am bummed I didn’t get to stay for longer. They’re definitely on my list of must-sees.

Okay, overall, I chalk the weekend up to a success. Hopefully the timing works out again for next year so I can head back up the Ohio River for round two. 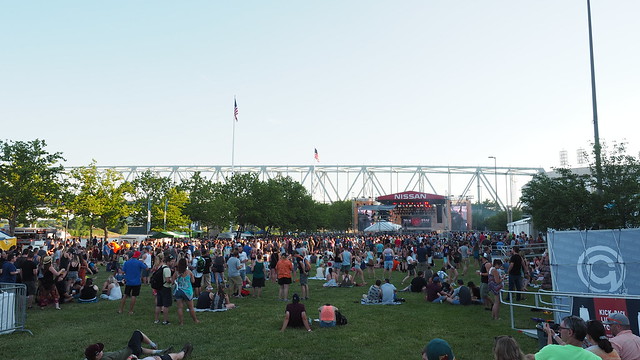