It truly has become festival season. For us, Shaky Knees marks the beginning and then it’s no slowing down until September, with local and regional events going on throughout the hot, sticky summer. This weekend marks another festival, Moonshiners Ball in Irvine, KY, which describes itself as “homegrown and musician-run. The artists are selected because they are original, because they will compel you to dance, or to think; to instill in you great calm, spontaneous joy or righteous fury.” Just listening to a little snippet of Con Brio’s music, it makes absolute sense why they’re at the top of Moonshiners’ lineup. The San Francisco band, who also joined us in ATL for Shaky Knees, wants you to dance along with their spiritual, soulful, psychedelic tunes, and I think you’re going to find it difficult to not comply with their request. 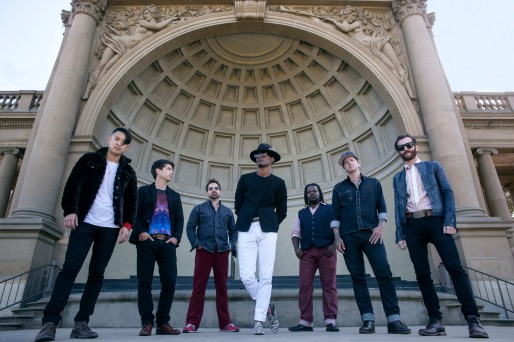 We threw a couple of typical LML questions their way, and heard back from Marcus Stephens, the man behind the saxophone. Check out what they had to say, have a little listen, and then head on down to Irvine to catch these guys on Saturday night.

Live Music Louisville: Your all’s live show precedes you…we’ve read it is spectacular. How would you best describe a Con Brio show?

Marcus Stephens, Con Brio: No matter the venue or crowd size, I’d say our approach is the same. We thoroughly love what we do and it comes across on stage. Our job is to move crowds!

LML: Sports reference, but what “pregame” rituals do you all do to get ready for a show?

MS: As far as pregame rituals, there’s only one. We huddle up, sometimes there’s words spoken, sometimes not. We break the huddle with a bit of a cheer. I say, “Punch the clock!”, and the band responds “Let’s work!”

LML: We are teachers as well…what message would you give to young people, particularly those who think they want to get into the music business?

MS: I have over 16 yrs experience in music education. My message has always been the same. If you’re choosing a career in music, you should have an unquestionable love for your craft. Work hard and work smart. If your goal is fame look elsewhere.

LML: What is your fast food guilty pleasure?

MS: The band tends to get pretty pumped up when we see the golden arches.

LML: Did you have the chance to check out anyone else at Shaky Knees?

MS: The band favorite was definitely Ryan Adams. Such an awesome song writer!

LML: In general, who is on your “on the road” playlist right now? We’re always looking for suggestions!

MS: Our van playlist is quite expansive but some recent spins have been: