The “Big Gig” is just that. A HUGE event to showcase the Louisville Leopard Percussionists, the unique music education program based here in town.

Their new album was released in March. Be ready to experience some feelings.

Dead Man Winter (featuring Dave Simonett from Trampled By Turtles), with The Pines

So it sounds like Trampled is definitely on a hiatus right now, which is sad because we were loving on them not too long ago. But luckily we can get up close and personal with Dave Simonett at Headliners to kick off the week.

ICYMI — the Dalai Lama is in town this weekend and so it only makes sense that the Kentucky Center is set to host a Tibetan Freedom Concert. Join Over the Rhine, Ben Sollee, Peter Mulvey, and Tibetan flutist, Nawang Khechog to benefit Louisville’s Tibetan Buddhist Center.

The 2017 release of Snowdonia has lots of people talking. LOTS.

When you’ve made it through 40 years and probably weren’t expected to from the get go, it’s definitely a feat.

A Place To Bury Strangers

The video below is even weirder than the band’s name, and I love it so much. Count us in.

WFPK’s Waterfront Wednesday with Murder By Death, Whitehorse and Maximon

YAYYYYY IT IS WATERFRONT WEDNESDAY SEASON! The weather is shaping up to be quite nice. Join us to kick off our fav free concert series. 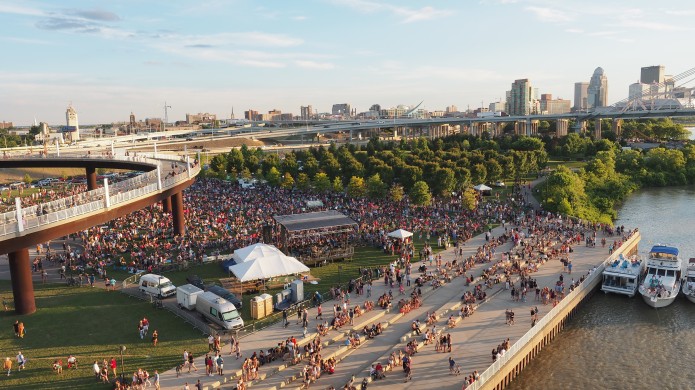 Okay, this sounds fun, too. In a gluttonous, voice-killing, hair-teasing kind of way.

Since he’s been around, Craig Bell has had a pretty significant impact on the punk rock scene, so this is a treat.

The monthly Mag Bar dance party is back. Break out your bell bottoms for this one, folks!

The Jayhawks with Wesley Stace

They’re described as one of the best American rock bands, and since it’s a partially seated show at Headliners, you’re getting the chance to dive right into their greatness.

Cedric Burnside can just about do it all. The common thread throughout, though, is the blues. Born in Memphis, it is clear the blues is in his DNA.

If metal is your thing, I hear they put on quite a show.

According to the FB event page, “it will get weird.” So, yes.

Not particularly our jam, but you can’t deny the impact that Tim McGraw and Faith Hill have had on modern country music. Plus, the power couple has us being like #relationshipgoals.

We’ve seen All Them Witches a few times, including at Zbar, and the two go together perfectly. They have new music from February’s Sleeping Through The War.

We haven’t heard from Bridge 19 in a bit, so this is great news.

Daya is all over the charts. Get your pin and head down to the Chow Wagon for some grub and tunes.

Let’s hope Saturday’s forecast is 100% better than last weekend’s so you can come hang in our neighborhood! Live music will be happening throughout the evening at Monnik, Check’s, Four Pegs, Goss Ave Pub, Lydia House, and Finn’s.

I’m reeling just thinking about all those angsty teenage feelings.

I feel like with each of these three bands, we’re probably going to hear more about them in the near future. So get your butt to Zbar so you can say you saw them first.

TFG has had some not great press recently, but this event should not taken off of your can’t miss. The regular party has grown in size and features DJs, bourbon and art.

An Evening with Leo Kottke

“Legendary guitar virtuoso.” Couldn’t have said it better if we tried.

The American Journey that Teddy Abrams will be taking highlights American composers, including Louisville’s own Jecorey Arthur. 1200 will join the LO to help wrap up the 2016-17 season.

I mean he’s a little country cutie and can casually play a shit ton of instruments.

Chicago-based Crown Larks will take Kaiju’s back room by storm, following a couple of local bands.