Apologies for being tardy with this one – February is a rough month for teachers, especially with no snow days. Anyways…

Frederick The Younger have been the city’s latest “it” thing. And I’m not just saying airtime in Louisville (which is incredible on its own). I’m talking about national recognition. We love seeing and hearing local peeps on this level and this band is there. We celebrated their new album, Human Child (which we got drunk and listened to, too) at Headliners last month.

Joann + The Dakota opened things up, and they have seemed to really hit their stride lately. They continue to impress with their fuzzy rock (and puppet friends). Each time we see them, the band appears to be having the time of their lives, and this set in particular may have been their best night ever.

The night was meant to celebrate Frederick The Younger’s newly released recorded work, but I will adamantly stand by my belief that they are a band you want to see live. I’m not dissing Human Child, because I had a real fun time lit listening, but their songs take on a whole new life seeing them performed in person. The show had palpable energy and highlighted the new album, as well as the adorbs interplay between Jenni and Aaron (real life couple, on-stage power duo).

We were pretty thrilled by the all-star guest appearances in the encore, which payed tribute to The Beatles’ Sgt. Pepper’s album. Some big time locals joined the band on stage, with each guest providing the perfect performance of the legendary songs (like literally, I don’t think there could have been better choices).

Part of FTY’s vibe, in my opinion, is their regular people thing. Meaning, my friend has the same kimono as Jenni, they appear to like beer, and are a couple of public educators…that kind of stuff. They are able to do some cool ass, artistic projects outside of their day jobs, which is aspiring for the rest of us.

So it happened, this release show was a gathering of us normal teachers…cheering on these creative leaders.

Click the image below for the full photo album! 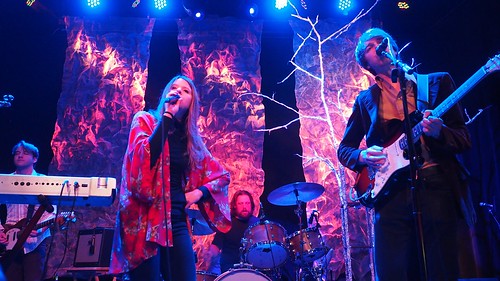