Alright y’all. We know you have loads of options for late night shows on Saturday (check them ALL out at Do502 and on this week’s Can’t Miss), but this is DEF one you shouldn’t miss. These guys have been coming to Louisville for some time now and it’s been an epic show each time (check it out here, here, and here). The busy Spirit Animal bros are en route to town, mid-tour, and luckily took a few minutes of spare time to answer some questions for us. So, read up, and then go support them on Saturday at outerSPACE! 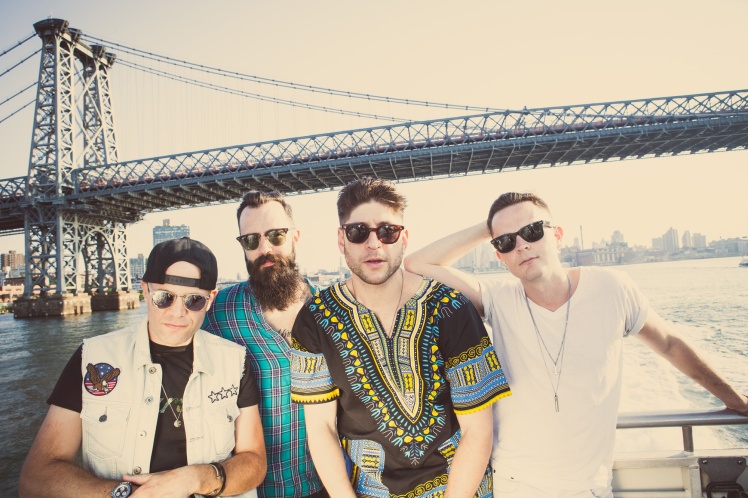 Live Music Lou: It’s been just over a year since you all were last in Louisville – welcome back! What has the band been up to since then?

Spirit Animal: Thank you! It’s been a pretty big year. We signed with Wind-up Records, finished our album, put out our EP, dropped the first music video (for “Regular World”), shot the second video (for “Big Bad Road Dog”), and now we’re starting to hit the road again.

LML: You’re playing at outerSPACE Saturday night, which is a pretty cool venue directly behind one of our fav bars, and it just so happens to be during Forecastle weekend. Will you get the chance to check out any sets at the festival earlier in the day (slash all weekend)?

SA: Are you saying you have backstage passes for us? Oh, you do? Sweet, we’ll meet you there. JK we won’t be in town until Saturday afternoon and have to leave early on Sunday 😦

LML: Bummer!! We’ve never toured with a band but we took a road trip last summer with friends. You find out some pretty…interesting things about people when in confined spaces for long. What sort of weird road habits do you each have?

SA: Everyone has a different A/C temperature threshold, degree of coffee addiction, and preference for what time of day it’s acceptable to listen to post-punk. But we’ve been doing this together for a minute, so we’ve all kind of become each other. Over time you start doing the things that used to annoy you about the other people. There is no high road. That said, at least two of us are willing to eat canned sardines in a confined space, and one of us dries his socks by pinning them between the window and the door frame at 70 miles per hour.

LML: I think Snapchat stories were recently becoming a thing last year and you’ve definitely upped your game since then. (Is it weird that I’d like to be eating your breakfast every day?) Favorite selfie lens or filter? Also, does anyone react as you’re making snaps while walking down the street (ie gym rants)?

SA: It’s funny you mention breakfast. I honestly believe that a new social media app gets popular once it becomes socially unacceptable to post what you ate for breakfast on the previously popular app. You’ll know Snapchat is on the decline once you stop wanting our breakfasts.

As for the filters, I’m just happy the popular ones come back around, because it’s fun to develop a character and have it be recurring. You can create these odd, temporary worlds. I mean, how else would we have been able to introduce Laid Back Zombie, Glad Sad Brad, Pop Art Douche, and Pierre Parapans (pronounced “pair of pans” with a French accent) to the world?

But, yeah, I definitely look both ways before snapping. Not for cars. For people.

Happy Sad Brad wants you to deal it out, God! Deal it out!!! pic.twitter.com/XCaePGW7bL

LML: What does the rest of 2016 look like for Spirit Animal?

SA: Tour, tour, tour. And blow the eff up 🙂 We’re also having a remix of “World War IV (to the floor)” done right now and writing a bunch with other artists.

Alright that’s a wrap! Be sure to have a spicy marg (or several) at Galaxie to kick the night up a notch and to help with those dance moves that you know will emerge.