Need recovery from your Derby weekend? Well, this isn’t exactly traditional recovery, but for us, it will do the trick. We will be making our 3rd annual pilgrimage to Atlanta for Shaky Knees, but will absolutely be hitting up several of these events before then. Join us! Or live vicariously through out Insta/Twitter feeds! And come back here later for our investigative reports.

Who doesn’t want to spend their Mother’s Day with Juvenile backing that azz up?

Matthew Logan Vasquez should spark some interest in your memories as front man of Delta Spirit. He’s been working it on his own for the last several months, and has a solo album out. We remember him being quite the presence on stage (the hat being a superb addition). Zbar’s Tuesday crowd better be ready.

This woman is a figure in so many ways. She started movements and styles that still continue today. Not to mention, Cyndi Lauper understands the importance of continual growth as is shown by the number of times that she has pushed herself into a reinvention. Her latest tour previews her new country work – yes, I said country. She’s interpreting some old classics with her new style.

A friend recommended this show to us. Ghost is a metal band with a dark, strange twist. The actual members of the band are still anonymous (how is that possible at this day in age) as they wear masks during their performances.

My Morning Jacket with special guest Twin Limb night one

Freaking My Morning Jacket…at Iroquois…This two night sell out is going to be special, I can feel it.

Born Ruffians with On and On

This Canadian band is catchy as hell. They definitely have that young indie rocker thing, but their newest work, a full length and EP released in the last year, shows some sophistication that comes with age.

We always have a good time out at Foxhollow with all the East End families enjoying some local food truck specialties and tunes with the sun setting behind hay bales. (Be 100% sure to take your allergy meds before, though.)

If Twin Limb isn’t ready for their festi-season, this will prepare them appropriately. Hyyyype. 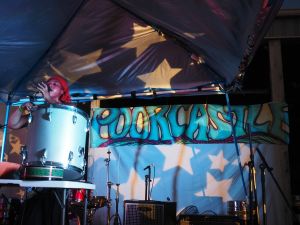 Another Louisville band with a new album. Our city is exploding with new music and we love it.