{Okay the title is sort of a lie and also sort of blown out of proportion. I totally beat on some instrument in an elementary school performance back in the day and in no way was my contribution to Mobley’s set anything magical.}

We headed to The New Vintage for a mismatched night of quality artistry.  Although we missed the first two, local acts for the evening- late as always- we were able to check out the out-of-towners Miss Shevaughn & Yuma Wray and Mobley.

They were both very active and spirited acts.  Miss Shevaughn and Yuma Wray definitely had a nomadic, hippie, California drought vibe but with a powerful twist. Shevaughn’s voice is incredibly strong with many variations depending on the song, the drummer kills and Yuma Wray not only has an epic beard but also carries songs with his guitar.

Mobley was the main event for the night and the small crowd got to see something special.  From what we overheard, he’s been to Louisville before, but it has been a while. His set has many layers to it: the man himself is switching roles multiple times even just within a song, but he also has deliberate imagery rolling in the background, and lights galore.  He even had an audience interactive piece- we all got some drum sticks and made the beat during one of the songs. It is a lot but I never felt overwhelmed by it all.  During his set Mobley played nearly a dozen different instruments, switching between them and from seated to standing multiple times even within a song.  I mean I was tired from our drum solo and just watching him work. The man is certainly impressive and an artist through and through.  We asked him a few post-set questions, which you should definitely read below. 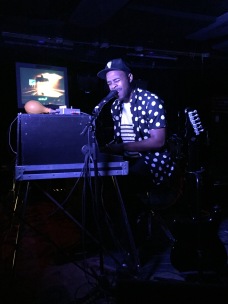 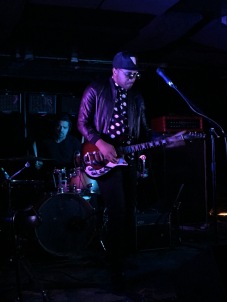 Live Music Lou: From your performance it is pretty apparent that you’re so involved in every element- visuals, lights, sounds etc… How long has it taken to develop your full set?
Mobley: Well, the songs are foremost, but yes, I also designed the stage show, the visuals, lights, album art and produced the records. It’s an ever-evolving thing, so it’s hard to measure precisely, but once a song is written and recorded, it usually takes me about 40 hours of work to incorporate it into the live set.

LML: You work real effing hard during your set. What is the best post show snack? (Like I wanted a piece of pizza just watching.)
Mobley:  The only thing I want after a show is a tall ice water.

LML:  Austin is clearly massive for indie bands- is that intimidating or a driving factor in your creativity? What is it like heading out on the road to other cities that aren’t quite that scene?
Mobley:  Neither really. Sure there are lots of bands in the city, but I don’t consider myself to be in competition with anyone. I’m carrying out my own vision; that’s something no one else can do.
My favorite thing is to play in smaller towns that don’t really get as much attention from touring musicians. They have a hungry appreciation for live music and they bring a vitality with them to shows.

All-in-all it was a good night at The New Vintage and I’d definitely listen to or see both acts again in the future. I’ll leave you with this, though.