There is LOADS to do because, duh, it is Derby Week. Like you have lots of decisions to make all week. Choose wisely. We’re only kidding, because you can’t really go wrong with any of the options.  Keep up on all the social media outlets and check back here for our reviews and photos! 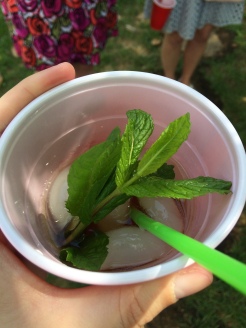 Joining local innovator Cher Von is a band from the Sahara whose sound has been described as simply desert rock. Imarhan brings a traditional form from their part of the world called Taureg music. This will be a cultural, eye-opening experience.

Lucinda Williams is obviously a legend. She should kick off Derby week at Headliners just right.

Ephemera is their latest release, but you probably know these Irish fellas and lady from their heavy play of “The John Wayne.”

Like Little Green Cars, Frightened Rabbit has lots of radio play in town over the past few years, and that is where our initial experience with the band has come from (check FPK’s Live Volume 8.) The Scottish band JUST released a new album, so I’m excited to hear their newest stuff live.

Hip Hop throw back at the Waterfront sounds about right. Included in the fun are Chow Wagon delicacies.

2016 Waterfront Jam with The Bright Light Social Hour and Vessel

WFPK’s contribution to The Kentucky Derby Fest-a-Ville includes Austin psych rockers, The Bight Light Social Hour. Their better-than-my hair is only a small part of what makes their live shows so compelling. Get ready to party, party, party.

You saw this group this winter at WFPK’s Winter Wednesday, and like us, you were probably drawn in the intricacies of their sound and performance. Zanzabar should be the ultimate spot to catch David Wax Museum – you know we love personal nature of the venue.

Our peeps at Do502 are have a day rager with some of your favorite local bands. If you haven’t been to Galaxie or The Green Building, shame on you. Here’s you chance to redeem yourself. Take it from us, the spicy marg is where it’s at.

Tokyo Police Club with From Indian Lakes and Silver Spoons

Apparently we are set to spin the wheel next time we hit up Howell Dawdy’s infamous Karaoke shin digz. Terrifying thought, guys. This month’s edition seems to be even more meaningful, backing Girls Rock Louisville!

The Cold War Kids never disappoint when they are in Louisville, even when Nathan Willett’s voice is less than its usual.  I have a feelings many people will be out taking advantage of this lively Thurby gig.

TRIFECTA: Three Nights of Free Music at Haymarket Night One: The Deloreans, Nosiebody, and Maximon

Brews and music seem to be an obvious Oaks choice for locals avoiding the track.

Trampled By Turtles and The Devil Makes Three with Elephant Revival

Even with all of the stellar options for post-Oaks, and with our impending sensation Derby party to prepare for, it is hard not to be tempted by a night with the TBT guys.  Each time we have seen them, they sweep us off our feet… hard.

Night two should fill Haymarket’s back room. No doubt.

Dancing is a requirement for this Living Room show.

If you make it out after Derby, it seems obvious that you need more bourbon aka Haymarket. And Ween covers are likely also exactly what you need.