IT’S BIRTHDAY WEEK BITCHES! Britt will be celebrating another trip around the sun this week so we’re gonna do our best to be out and about – she’s ready to party!!!! As always, follow our adventures on social media and check back here after for photos and reviews of the shows we attend.

Metric got introduced to my music library back during Grey’s Anatomy’s hay-day 10 years ago now. The Canadian band has been on the road pretty heavy this last year though, in support of their latest album Pagans in Vegas.

This sounds super creepy slash interesting. Why not?

Like Metric, Dress Bessy sticks out to me as a Grey’s alum. It has been several years since the band has given us new music, but the wait is over as their new album, Kingsized, is out. People are loving their return.

I foresee another college bro/babe wasteland at Mercury. Nothing wrong with that.

This lady is apparently a one-woman-show, looping and layering all kinds of stuff into something genius. She’s leaving the country for an extensive Euro tour after this week of shows, so let’s send her off with some good vibes.

It is Communion time – lehhgoo! 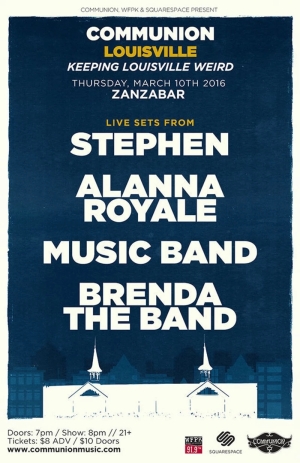 Bob Schneider is no stranger to Louisville – he’s played our city several times, most recently at Mercury in 2014.

This crazy energetic live band was also in town recently, but all should be excited about this New Vintage show. A Friday night just going for it with this Philly band sounds just about perfect.

An all Louisville lineup. NOICE.

The Bardstown Road legendary St. Patrick’s Day Parade will take over The Highlands this Saturday. We’ll be there prepping for our big evening. Let’s drink some green beer together!

It is a Louisville Palace sell out for the hometown kid. Bryson Tiller’s stock has risen substantially in the past year or so and his style of hip-hop is certainly on the forefront and HOT AS HELL right now.

We’ve got a a hip-hop double team Saturday. If you aren’t headed to the sold out Bryson Tiller show, this is a no brainer. We’ve only heard great things about Vince Staples’ live show and we’ll absolutely be there.

Are the hip-hop options for the evening not your thing? This incredibly complex Boston, MA band will be at Zanzabar.

It’ll be a folky night in the infamous living room. If you’ve got bad joints or just had a rough day at the parade, a cozy spot on Dusty’s couch in the front row might be exactly what you need.

If you’re still rolling after the parade, and after your show options, stop through Mercury to continue the day.