This week has the potential to be something else.  You’ve got quality options every single night.  Get out and do stuff! During the week, check our social media for photos and updates, and then head back here for reviews!

Bruce Springsteen and the E Street Band: The River Tour

Goodness I’m excited for this one.  The whole fam-damily is coming down for Bruce- my mom says her 25th birthday, fourth row with “The Boss” was the best day of her life- and I’m expecting only greatness.

I’m not going to miss Bruce, but I am pretty bummed we’re missing this instead.  Don’t worry, we’ll have eyes and ears on site though.

Zbar on a Sunday?  Why not.

If you’re a Grateful Dead fan this is your ticket.  This band started as a tribute to the legendary jam band but they’ve taken off as their own entity.

Cherub was a highlight of Forecastle for many last year… we only briefly caught their set but very distinctly remember the sweaty energy exuding from the Ocean Stage.

Agent Orange, In the Whale

Kurt Vile and the Violators with Xylouris White

This man has had some serious buzz as of late.  His 2015 release, b’lieve I’m going down…, got a ton of play on WFPK and made many best of the year lists.  We’re excited to see what all the talk is about.

The word on the street is this band is intense live. If you need a mid-week pick me up this will definitely get you rolling.

Arlo Guthrie has always been known for his songs and the social commentary they focus on.  His most well known song, “Alice’s Restaurant” is the namesake for this tour, celebrating the 50th anniversary of it’s release.

We chatted with this bunch last year and they seemed pretty cool.

Contrary to what their name might suggestion, Frontier Folk Nebraska is not from Nebraska.  Their actually from nearby Covington, KY.  Let’s welcome our fellow Kentuckians to Zbar appropriately.

One of Louisville’s favorite bands are throwing a party for their new album, “Lonesome No More!” This new album was funded by the people and this show will be a big THANK YOU for that support.

Vandaveer is now a band stationed in Louisville and WFPK is showcasing the new locals with another artist in residency run. They will have a string of shows around town, so you should probably check out at least one. 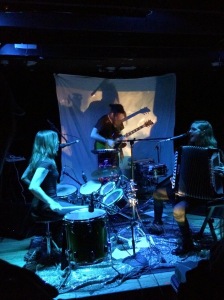 They call their style of music “trashgrass” which could mean a plethora of things.

Did you know that Highly Suspect received a Grammy nom?  They were in Louisville not too long ago for a Communion show and are back at Headliners this time.

We interviewed this Nashville band and they not only sound like some pretty cool humans.  They also play fun music that is worth the listen.  They’ll be at Third Street Dive, so check ’em out.