The crowds were definitely out for the Saturday lineup, culminating in a majestic My Morning Jacket set. Here are some big highlights:

If you missed the Dr. Dundiff set on the Ocean Stage, I’m very sorry. What Roman Aprile pulled off was something else and unlike anything else you will see the rest of the weekend. His all-star band of friends played the mixes for each of the major Louisville MCs that took the stage, while Dr. Dundiff held the beat on the drums. We should all be really sad to see Aprile go as he heads out west, but he’s going to do great things. And then a Jim James cameo? Hell yes.

The number of young rockers that are moving through the Port Stage is astonishing. They’re all friends and fans of each other’s bands, and their cult followings love it, too. Broncho and Twin Peaks yesterday, White Reaper will be on today – everyone was out to watch each other’s sets. The high energy is crazy fun and something you need to see in person, so don’t miss out on day 3. 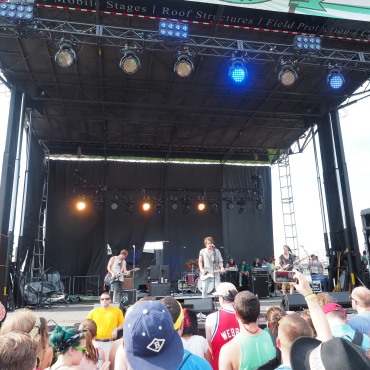 This city definitely has some diverse yet always committed music fans. The great thing about Louisville is that even though we are remarkably smaller than LA or NYC or even Nashville, the same number and caliber of acts always make stops here because there’s a dedicated following that will show up and support. Shovels & Rope speaks to one sect of the music spectrum Louisville is into. They have been here how many times in the past year? Even with four appearances in that span, their Forecastle set was still packed. This year’s lineup as a whole reflects the diverse interests of music fans in our city. There are several bands that have been here fairly recently, but so far, Forecastle fans are still showing up for them.

It may have been super hot all day (“I can’t even dry my sweat off because I have so much sweat on me.” – Cherub), but we made it through Saturday without any major, game-changing weather events. The one time it looked like a potential issue, the storm took a turn south and missed us entirely. That being said, the Forecastle crew did a great job recovering from the craziness of Friday night, and aside from a few soggy parts, nothing about the Waterfront venue seemed that much different. Bravo, y’all. Let’s hope we can get one more good day in!

Alright, let’s finish strong – Sunday is bound to be another good one!

One thought on “Forecastle Day 2 Recap”