Do502 teamed up with WFPK and Leo Weekly as well as Louisville’s top notch local music venues (Mercury Ballroom, Headliners Music Hall, Zanzabar and The New Vintage) to put on an inaugural Free Week.  Starting January 27th with a kick off party at Haymarket Whiskey Bar, local music fans were able to check out established and rising Louisville acts at different venues around the city. Each night had it’s own distinct type of music being played reaching as many fans as possible.

The kick off party started early at Haymarket with bourbon, a photo-booth and a few eclectic artists performing.  We arrived late, only catching the last few bars of Cher Von and missed Shedding in their entirety, but stuck around to “socialize” and have a few drinks.  It was a low key, pretty early night to get things started- saving everyone’s energy for a full next few days.

The New Vintage welcomed Coliseum, Xerxes, The Foxery, Parlour, and Black God.  With five bands on the bill, we heard it was a pretty late night, which we chose to skip out on.  From social media, however, it sounds like everyone went real hard.

Thursday’s line up was another full one and went very late for a Thursday night as A Lion Named Roar, Discount Guns, Lydia Burrell, Satellite Twin, and Six Bells all played varying sets for a fairly typical Zbar crowd. We arrived for the beginning of Lydia Burrell (aka Howell Dawdy aka Alex Smith) and got to watch his stripped down, solo performance with just his voice, a guitar and some fancy synth work.  Next, Discount Guns, who caught a lot of people’s attention after their opening performance for Lucero a few weeks back, rocked for the largest crowd of the evening.  The duo plays hard and clearly enjoys what they are doing, which translates to a good, “raunchy” time for viewers.  Closing out the evening, starting past midnight and into Friday was A Lion Named Roar.  I remember hearing them on WFPK when I first moved here but haven’t heard much from them since then (I was into A Ghost in New York City for a couple months).  Even though it was late, we couldn’t make ourselves leave before they were finished, which is a testament to the quality of the band.  Though they are a self-proclaimed pop group, the variety and technique of their instruments makes me think they actually fall outside of that tight little box.  Can’t quite say what it is, but I like it.  2012 and 2013 were pretty good years for this band in the Louisville scene and beyond.  This included local highlights of a Waterfront Wednesday appearance opening for Ra Ra Riot (and yes we were there in the very cold rain that day) as well as playing Forecastle, and some national attention via MTV and other entertainment outlets- so a big deal.  That being said, I didn’t hear much about the band in 2014, so starting the 2015 year with a huge $20,000 prize/contract for songwriting as well as a great show at Zanzabar bodes well for the group.  After they finished we approached lead singer Chris Jackson to introduce ourselves (he couldn’t really miss us taking pictures in the front row) and we talked about getting together for something special on the blog- if you’re reading this Mr. Jackson, yes, we’re totally still interested! 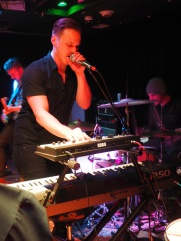 A Lion Named Roar at Zanzabar

A Lion Named Roar at Zanzabar

Shadowpact, Touch AC & The Smoke Shop Kids, Jalin Roze, and 1200 closed out the epic first ever Do502 Free Week at Mercury Ballroom.  After the huge success of the recent Louisville hip hop conglomeration at Headliners a few weeks back, it made complete sense to end the week with this lineup at the beautiful Mercury Ballroom.  We missed the first two acts as we were at the Kentucky Center watching an AMAZING Ben Folds and Louisville Orchestra collaboration (look for this post in the next few days!!), but made it for the end of Jalin Roze and 1200.  Mercury Ballroom was filled to the brim- we didn’t have the online pre- ticket, so we had to wait outside in line for a little bit… which should tell you how many people were there.  Roze was energetic as always and brought out some of his friends to help him rap.  I know that he and 1200 have been working on a collaboration (“1200 Rozes” closed out the entire evening, in fact) and I look forward to pretty much whatever comes out with Roze’s name attached to it. 1200 and his crew concluded the evening and Free Week in it’s entirety about as good as anyone in the city could have done it.  Jecorey (aka 1200) had introduced himself to Brittany and I at Zanzabar the other night, and we had stopped by Nachbar Friday to catch a bit of his set with D’Arkestra and say hi, so we were very excited to support him once again.  He didn’t bring along the strings or the small choir like he had a few weeks ago, but stuck with his original band and singers (and some new confetti canons) which is just fine in my mind.  It was fun seeing the over-the-top version at Headliners, but truthfully not necessary because the basic components are just that good alone.  The crowd, as is typical, were very engrossed in their set, and from our perch upstairs at Mercury, I noticed a lot of people that knew the words to 1200’s songs (including Daniel Jackson of The Tunesmiths who led us in unison at one point).  After the show we did a little wave at the front man, but actually bumped into baritone vocalist, Tyler Dippold and got chatting with him.  Speaking with him made it very clear that the all the musicians associated with 1200 are driven towards making the best music they can. Jecorey et al are getting their music out there and the city is catching wind- it’s only a matter of time before it gets out of the confines of Jefferson County.

A huge thanks and congratulations goes to Do502 for hosting such an amazing event.  We attended 4 out of the 5 nights and in my not so professional opinion, each was a huge success.  More and more people are starting to hear about this incredible resource for events and happenings in the city, and good call guys, because a bunch of free concerts is a good way to get people drawn in.  Also, a big thank you to each of the bands that participated!  Not only did they give us some awesome music, they also showed how varying, talented and inclusive Louisville’s arts culture is.  Each night other local artists were out showing support for the bands playing that night- both artists who performed at some point during the week, and others who just wanted to see a good show.  This week brought together Louisville’s music community to appreciate and enjoy the best of what this amazingly diverse and gifted city has to offer.

AND, To see more of our pictures from the week, check out Do502’s recap!