Sunday’s are notoriously our favorite festival day, and this Sunday was no different. The extreme humidity and a raucous Saturday kept the crowds at bay until around 6, and then the place filled up in anticipation of Arcade Fire. They wrapped things up on the highest note possible.

To be honest, we weren’t initially thrilled with the lineup this year. That being said, it would be really, really hard for us to miss a Forecastle at this point. The changes to the grounds/organization have started some dialogue about the direction of the festival. The new expanded Party Cove kept a lot of the young and reckless over in one area, which we tended to avoid. The new downsized Port Stage location was shaded and fit the vibe of the curated sets. The Boom Stage kind of took on the dad music, roots rock feel, and the Ocean Stage held all the DJs, hip hop, and avant garde acts. We get the reasoning we guess, but there almost feels like there are different festivals for different folks all in one space. Personally, we feel there could be a little more cohesion, but the people who plan the fest, know way better than me. Nevertheless, we still saw some good music and had a great time. Forecastle holds a special place in our heart, and we were honored to be a part of it once again. Until next time! 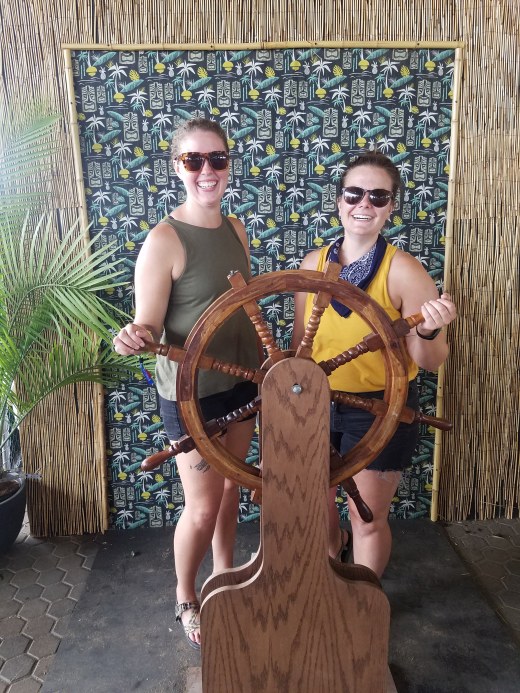 The Punch Brothers not only sounded great, but boyyyyy did they look good, too. Beaver had some serious suit envy of the bros. The short bit of hard rain was also a romantic touch. We got to hear some of the classics, some of which have close ties to Kentucky, but also some music from their new album, All Ashore. The tiki themed instrumental “Dot Dot Dash” was very appropriate at Forecastle.

Again, we’ll say it: why can’t hip hop artists get the Mast/Boom Stage? That being said, the Ocean Stage crowd followed Vic Mensa’s directions beautifully during his closing set. They ran from right to left and left to right, they parted the sea for him to walk out… it was a formidable thing to witness. People were so engaged in everything he was giving.

This may seem surprising, but the amorphous jazz-funk-soul-instrumental group, Khruangbin is winning the coveted dad music award for Sunday. Really, they win the everybody award, because there were all types of people that were very into what this Houston band was giving. They did some fun cover medleys, too. 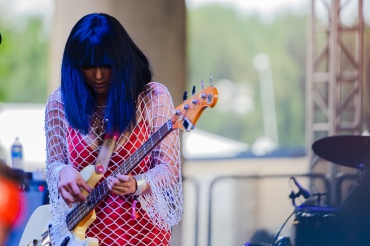 Win Butler is a showman in his own right, but we are giving this one to the guys of White Reaper, who kept face even in some abysmal conditions. Their perseverance for one of the toughest sets of the weekend was pure rock and roll. Saturday was hot, yes, but this early Sunday set was hot AND humid, making for a really wet hour. (Yes, let’s make sex jokes here.) It was bad enough that drummer Nick Wilkerson had to strip off layers of clothes and run off stage… we are assuming to puke, because he looked rough. Tony Esposito had insects and dirt stuck to his sweaty face. Nevertheless, the guys kept going, motivating the crowd to do the same. Ryan Hater was a big part of that, whose presence is always a big boost.

Arcade Fire showed us why they are a bona fide headliner. Now don’t get us wrong, plenty of fun was had during the Friday and Saturday headlining sets, but this was a whole different level. The production was top notch and incomparable to anything else we saw all weekend. From the basketball pre-game lineup entrance through the crowd, to the lighting / disco ball effects, it was visually and audibly an unbeatable experience.

Teddy did it once again! Michael Cleveland impressed the hell out of anyone who happened upon his set, Maiden Radio graced their crowd with their beautiful music and Teddy’s ultimate Avenger set tied the whole thing together. Matt Myers made his highly anticipated appearance for several covers, and many of the weekends artists popped up again for this final Port Stage set. We really think the Port Stage move was a good one, and handing it over to Teddy was an even better one.