There is no denying the absolute talent that this band brings to the table. I know at least a handful of people super bummed about being out of town for this one – don’t be part of that crowd. K great.

Louisville loves these English men. For real, every time we see them here in town, it is sold. the. eff. out. Their Roo set this weekend was also overflowing. 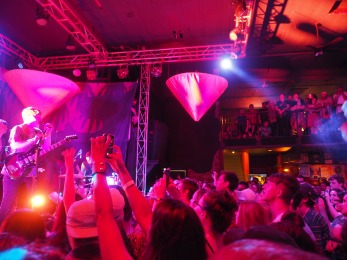 I have zero complaints about this show being the alternative to Iroquois’ sold out show.

We have some friends who were STOKED when this show was announced. Get ready to sit in a trance for a long while.

Because everyone could use a little electropop to liven up their Tuesday.

Ghost may be a lot for some people, but our trusted sources say this is a show that you can’t miss.

Fun facts: he was an original co-founder of Dark Star Orchestra and still jams with Grateful Dead members. Sounds like this dude knows what he’s doing.

Dreamland always has interesting shows, and this one is no different.

It will certainly be entertaining watching these five musicians play together for the first time.

Tank and The Bangas

Their NPR reign has recently ended, but the word is for sure officially out about Tank and The Bangas. This one already sold out the new Zbar space (big time feat) so hopefully you were on it and got your tix early.

It is Rye Back Porch time! Joann + The Dakota are working hard and gaining momentum this year, especially with the release of Holy Coyote! This round benefits the KMAC.

Twilight Thursday with Frederick The Younger

Honestly, the best time at Churchill Downs is definitely nighttime. Why not enjoy a little of our local faves, too?

The Mercury Ballroom sold out in minutes for J. Cole. I’m honestly surprised they kept him in this venue or didn’t add another show. Nevertheless, this is a huge deal and I’m so excited. Man has gone platinum without any features, so he clearly is good at his craft.

Hoedown in Germantown with The Downhill Strugglers

I mean, how many chances do you get to go square dancing in 2017?

Mostly I really want there to be a bus that is identical to the one that’s on this tour poster.

Normally I feel like bourbon is my drink of choice with bluegrass, but I think I can make a Galaxie marg work tonight.

This is such a big deal. If it isn’t sold out, it’s got to be damn near close. They blew my socks off at Bonnaroo this weekend and am BLESSED to see them twice in a week.

This scheduling conflict is a big problem. Gerrit Welmers is an intense performer (as seen at Bonnaroo this weekend) and Mercury is going to be a giant party. (Also, you’re welcome for reminding you of this performance below.)

You’ll get the chance to see the nine newly-formed bands perform (from Girls Rock Louisville camp) plus a few special guests.

🏳️‍🌈 Live music sets are happening throughout the weekend down on the Waterfront stages. 🏳️‍🌈

Get your favorite brews on tap while hanging with Louisville local, Eddy Green.

As of this moment, the weather’s lookin’ pretty fine for a Friday afternoon at Bicentennial Park.

18 records is pretty impressive, but so is the band’s 36-year run.

We have personal ties to Sundy Best and it is always a big deal when they are in town (especially at Fourth Street Live).

Do502’s description of the show says, “time to get brutal at Kaiju with 3 hard hitting, mind splitting, powerful bands.” Couldn’t have said it better myself.

If you’re asking, “Who is Ha Ha Tonka?” just press play and I feel sure that you’ll recognize their catchy tunes.

I expect lots of young’uns fangirling for this lil boy. After all, he did co-write Biebs’ “Boyfriend”… and they (cough, we/me) love that ish.

We’ve never made it to the Reggae Picnic, but we’ve heard it is hella fun. WFPK, jerk chicken and Caribbean tunes are all wonderful things.

Jacob Resch with The Leg Benders

It’s been a while, Haymarket.

Wait, ReSurfaced is back for the summer?! Also, we heard the bike-in was pretty tight at Finn’s a while back, so this one should be on the same (if not higher) level.

When has Kaiju ever steered you in the wrong direction?