After the craziness of Thanksgiving and family time, we’re certainly appreciative of the early week break for a little detoxing.  But once the weekend rolls through, we have to be ready.  A couple of our favorite bands are marking the release of new albums, so it is sure to be a good time. Check back here later for reviews and a photo recap of our adventures!

It is your last chance to catch this November residency with Screen Door Porch at The New Vintage.

We’re so jealous of everyone that can make it downtown to this lunch time show.

The Hillbenders are a folk, Americana, bluegrass morphed band that has been playing together for a long time- and this lasting relationship means that their music meshes together about as good as any you’ll hear.

WCHQ is another great local radio station, so why not celebrate 1 year!

Moon Taxi with The Lonely Biscuits

I called this two-night stay when Moon Taxi started announcing their Daybreaker supporting tour earlier this fall. Moon Taxi has become one of our favorite live bands, and each time we’ve seen them they’ve lived up to the high expectations we have for them. It was a pleasure and fan girl moment interviewing them a few month’s back in preparation for their Moontower Music Festival headlining set.  We saw The Lonely Biscuits that Saturday in Lex, too, and loved what we saw.  Nevertheless, we’re sure Headliners will be packed and ready for the Nashville guys. 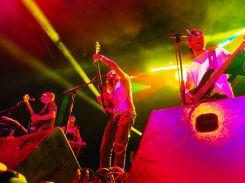 Kid Plastic: Tribute to the 20th Anniversary of Radiohead’s The Bends

We had a blast “Lit Listening” to this new release from Twin Limb and I think Kaiju will be packed with supporters Friday night.  There are only 150 tickets, so jump on this quick.

Rayland Baxter has Americana music in his blood, being the son of Bucky Baxter, but Rayland has had a big 2015, stepping out on his own. This KCD theater show is another great 2015 addition, carrying over to what is lining up to be a unreal 2016.

Night two will feature Kopecky opening up for Moon Taxi.  I promise, this will be a sweaty, spirited experience.

We were obsessed with this song from Daybreaker after hearing it live this summer. BALLIN.