New Albany is known for being a quaint town across the river, whose heyday reached a peak back in the 19th century – hence the moniker, “Boomtown.” My dad would tell me the most famous person to come from New Albany is Fuzzy Zoeller (a golfer), but in more recent times, the big name is Houndmouth. The band is rooted and has recorded in New Albany, and they are now the curators of the second annual Boomtown Ball & Festival in the historic downtown district. WFPK, Production Simple and Mayor Jeff Gahan used their connections to bring in some delicious local food, eclectic (Flea Off Market) vendors, and a line-up full of acts known to impress with their live shows.

We have already established that we are perpetually late people – it’s not ideal, but just the way it is. We missed these guys but were able to chat with them for our Do502 Weekly Preview. They hinted at some big news for the 4th of July…and that has now been announced – they’ll be part of the HUGE renewal of fireworks and subsequent festival down on the Waterfront curated by Teddy Abrams. This day includes the entire Louisville Orchestra, our friend(s) 1200 and the always delightful Ben Sollee. Consider your plans made.

The Hart Strings got started shortly after we arrived and their pop melodies left us with a hopeful and positive vibe. The band features Josh Druin on the violin, with many songs taking moments to highlight his talent. A friend from college reached out recently about having them as their wedding band…definitely giving the stamp of approval on that one.

Adam Kramer (The Broken Spurs) has returned to Louisville and has a new project: BigBig. We were impressed by the pipes of female vocalist, Rachel Hagan Witzke. The American flag draped over Max Balliet’s shoulders was a nice touch considering it was Memorial Day.

Jalin Roze is a man on a mission, one that he seems to be accomplishing thus far. Sunday he and The Grand Nationals held one of the biggest crowds of the day, and possibly the most engaged. We have come to love Roze’s brand of hip-hop as it covers so many genres and styles and clearly this love has crossed the river from Louisville, too. Having his keyboardist/vocalist back on with them is a huge plus in our eyes. Roze and his crew of talented musicians are always working hard, with new stuff on the horizon. As always, we can’t wait to hear (and see) it.

This was the first time we’ve seen Lydia Burrell with more people on stage other than the mastermind himself, and we liked it. Each time we see him, it’s so blatant that Alex smith is very good at what he does. We found it particularly interesting (thinking about his other act as Howell Dawdy) how he is able to change his persona so drastically with each act. He fully commits and we’re in to it. Keyboardist Aaron Craker played with two acts on the day – BigBig and Lydia Burrell – and is also a member of Frederick the Younger. Clearly, he is a commodity for his skill set and that’s keeping him plenty busy.

What a peculiar and imaginative man. Langhorne Slim’s dusk set probably drew in the largest crowd of the day. A part of his appeal is his interaction with the audience – you stand there and feel fully involved with his music and story. He announced an upcoming show in Louisville in August, at Headliners, and I fully expect another large gathering.

The Features had a tough act to follow after Langhorne Slim. We needed to grub at this time, but saw a snippet of the band and they kept the crowd going.

As the daytime festivities came to a close and vendors started packing up, Nashville band The Apache Relay took the stage in front of a crowd that was smaller but definitely there just for their show. As always, the live show was good, but I have to admit, I think I like them better in the cramped quarters of Zbar. In my opinion, Mike Harris carried the show and his scary illusion glasses (though hard to turn away from) had nothing to do with it. As has become customary, Katie Toupin (of the host band) made a guest appearance playing for Apache Relay’s song, “Katie Queen of Tennessee.” 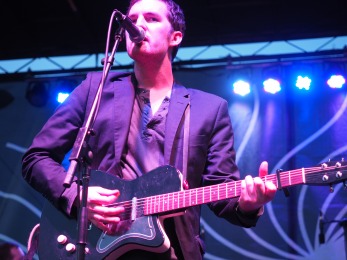 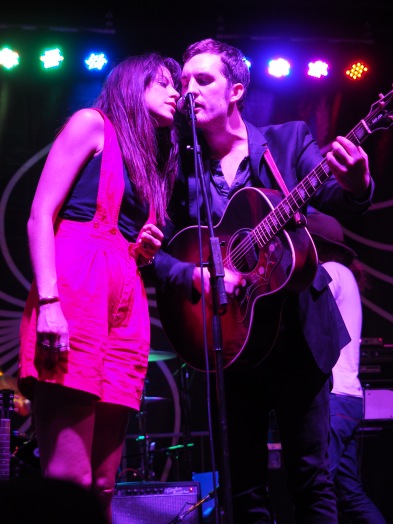 In its two short years, the Boomtown Ball has been a great addition to Memorial Day weekend in the area. Next year, you’ll know where to find us.

To see our album from the day in its entirety,  check out Do502.com!

2 thoughts on “It was a beautiful afternoon in Boomtown”