If you didn’t know, Fleetwood Mac was in town this past week on their most recent reunion tour, “On with the Show”. And even though it has been (almost) more years than I’ve been alive since they’ve been releasing any new music with regularity or even been on good terms as a whole, the KFC Yum! Center was completely full. A snow storm for the ages couldn’t even stop the 15,000 or so Louisville fans from coming out.

Legendary is about the only way to describe Fleetwood Mac. Their story is known but still not completely understood, especially for a twenty something, and this made their show so mysterious. I’m fairly certain this has been part of their intrigue since the beginning. (Side note: I’m looking for some epic biography about the band if anyone has any suggestions.) Stevie Nicks is such a personality- and she knows it- and although her voice at 66 isn’t quite what it was in her prime, you can’t help but be engrossed with every move she makes. Lindsey Buckingham is still a bad ass and rocks his ballads and guitar solos with such fervor. Christine McVie, back from her most recent hiatus, is the best addition possible and definitely completes the show. She still owns her vocal opportunities and is magical on the keys. I mentioned early in the evening to Brittany, that the white-haired drummer boy, Mick Fleetwood was still a beast and his close out of the show was fantastic. They played for a remarkable three hours and each member (besides John McVie) took their turn to speak, Stevie taking a few times in fact, expressing how excited they were to be back together this round- I think it’s safe to say, those in attendance were equally excited.

The art work throughout our house happens to be different album covers, with our living room wall focusing on the classic greats.  For example this wall includes, Joni Mitchell, The Beatles, Styx (who we saw last summer), Neil Young, The Eagles, The Rolling Stones, Johnny Cash and Fleetwood Mac. Granted it is not possible to see some of these music icons anymore, it is pretty cool to cross one off. 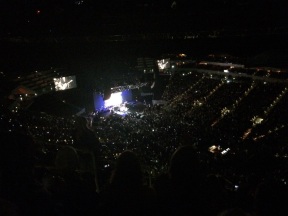 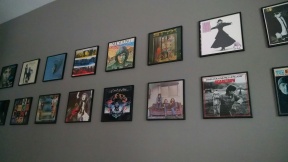 One thought on “Crossing another one off of “The Wall””