Shovels & Rope might as well relocate from their beloved Charleston to Louisville.  The duo has been here three times in the past five months, twice since the new year, and they’ll be back for Forecastle in July.  Our city has definitely opened its arms to this lovely couple as Headliners welcomed them back on Wednesday for their sold out show.

We’ve been to a few sell outs at Headliners (Jason Isbell, The Neighborhood, for example) but this certainly felt the most packed of any of them.  Being able to go to sold out shows is a huge perk for the frequent flyer pass, making the upfront cost totally worth it.  Having opened for the likes of Justin Townes Earle and Shakey Graves here before, I am sure it was really exciting for S&R to headline their own capacity show.

Throughout the set, Cary Ann Hearst and Michael Trent rotated between keys, guitar (acoustic and electric) and drums, and neither was apparently better than the other at any of their instruments.  I wonder what the process is for choosing who will play what for each song.  Their songs, though basic in the components, still seem complex- maybe it is the harmonies or the intensity that they play their staple instruments, but whatever it is, I’m in to it.

To me, a huge piece of what works for Trent and Hearst (besides Cary Ann’s amazing rock and roll hair) should be pretty obvious: overt chemistry.  I love how throughout their set, they are consistently gazing at each other as if to serenade one another and we are just there for the ride. Apparently such adoration is not for me (this Buzzfeed quiz pegged me as never getting married), but I certainly value it, especially since it has led to some amazing music from Shovels & Rope. I can’t wait to see them back again on the Waterfront for one of my favorite weekends of the year.
-Aubrey 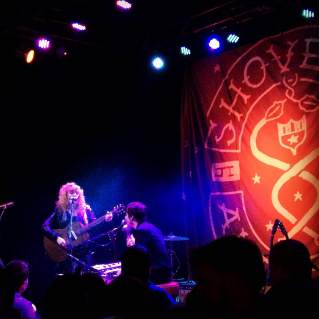