Congratulations are due to Louisville band Twin Limb on several accounts.  First, it was just announced that the duo, turned trio, will be heading out on the road with Houndmouth next month.  Second, Twin Limb is a first for this blog- this is the first multiple post band for us (Brittany saw them at Decca a few weeks back).  Third, now that my mainstay 23SB is on an indefinite hiatus, they may have become my new favorite local band.

The Wednesday night lineup was a full (and late) one, with three bands playing at Zanzabar.  Unfortunately for us, we only caught the last song of opener Graffiti– however, as we were coming in multiple people told us they were killing it.  Brooklyn (on the way to L.A.) based band The Point, was up next.  The pair played very mellow synthetic-pop accompanied with a mesmerizing visual montage to back them.

And then came Twin Limb.  I was really eager for this show, as Brittany had a very high opinion of the group after her initial encounter.  The blend of Lacey Guthrie’s accordion and incredibly striking voice with Maryliz Guillemi’s beats and harmonies warmed me up from the bitter cold quite quickly.  The inclusion of Kevin Ratterman on guitar- a musical man about town who is tied to a multitude of local acts- adds a lot to the group making their small sound appear quite big.  For me, though, it’s Guthrie’s voice that brings it all together.  Before the show, Brittany compared her vocals to Regina Spektor’s, which I can see now, but the other pieces certainly make this band one of a kind.

We were not the only ones there and impressed with the revamped group.  Either Jim James‘ doppelganger is a fan, or the man himself, in a spiffy corduroy jacket, was present and supporting. The group is scheduled to play at Zanzabar again on Sunday, January 18th before heading out on tour- I may have to be a groupie and go again. 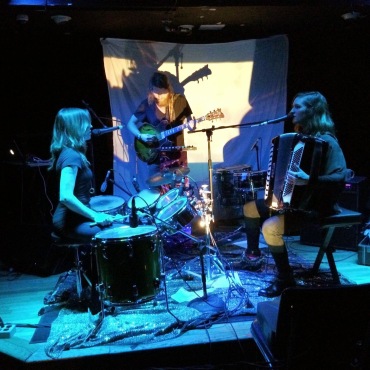 The Point at Zanzabar