ROMP has become our yearly tradition, something I very much look forward to. The smallness of the festival (in comparison with lots of other festivals) is attractive. The fact that there is only one main stage, combined with the fact that I can camp right nearby, is fantastic because I can hear the music even from my campsite. I was looking back through photos from my first ROMP, in 2012. We didn’t arrive that year until Friday, the second day of the festival. It’s crazy to see how much it has grown in just a few short years. Even though it remains small (compared to, say, Bonnaroo), the lineup still keeps getting better and better. 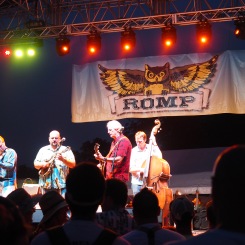 I had to skip out on the first night of ROMP because I couldn’t pass up Pokey LaFarge, Béla Fleck and Abigail Washburn at June’s Waterfront Wednesday. After setting up camp and cooking a charcoaled hobo dinner, I headed to the main stage to catch the second half of Frank Solivan & Dirty Kitchen. They’ve received praise from all over in the last few years with the release of the album Cold Spell, commended for blending classic bluegrass with newer americana influences, and it’s easy to see why. The four men livened the stage, setting the tone for the upcoming act.

The Lone Bellow, a band we constantly rave about to all of our friends and who we try to see as often as we can, played in front of a huge Thursday night crowd. The fierceness with which we’ve seen them play was evident on stage throughout their whole performance. The crowd (myself included) was so into it that they didn’t notice the impending storm – lightning streaking across the sky at a pretty alarming rate. Several times, the ROMP staff attempted to shoo the band off stage, and each time they played just one more song. Unfortunately, the storm prevented Chris Thile and Punch Brothers from taking the stage at all, disappointing everyone, the band included. Maybe next year, you all? Other than that hiccup, day 1 was a success.