The Communion Residency Tour has developed into a community built by and for musicians to showcase young, rising talent. Louisville is one of 9 cities in the US to host the monthly series, and for as long as I’ve lived in town, it’s taken place at Zanzabar, one of our stomping grounds. Last week, Communion brought new music from Hey, Rosetta!, Kevin Garrett, and Stereo Empire. 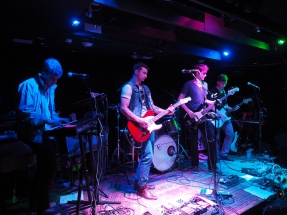 Louisville’s own Stereo Empire was originally formed in 2013, but hadn’t found the right mix of musicians until recently, and I think now they’ve got it. Their electronic pop-rock songs all have super catchy choruses, making them likable and easy on the ears. Bonus points because the guys are approachable and extremely friendly (check out our pre-show interview with guitarist Rob Saag here).

Kevin Garrett took over the middle set, wooing the crowd with his falsetto. The lyrics, his singing, and the piano all organically paired with the electronic beat and other components to his performance. Hailing from Brooklyn, where the standards of ‘cool’ are automatically higher than anywhere else, Kevin Garrett brought a hint of New York that fit in with the other two acts for this segment of Communion.

Hey, Rosetta! rounded out the evening with a stage filled to the edge. The 7-piece band had the entire audience jamming, including the event’s host, Kyle Meredith. I’m excited to see them again in a few weeks at the also up-and-coming Atlanta festival, Shaky Knees, where they will join huge acts including The Strokes, The Avett Brothers, Wilco, and Pixies.

Check out the full album at Do502.com!