We had been planning to go all along, but then we found out Twin Limb was going to be there, so we were 100% in. And then we only caught the last two songs since Zbar has been on its game lately as far as starting things on time. We’ll get you next time, ladies.

Ted Tyro was up next, introducing themselves as from “the butthole of Kentucky.” No offense, if you’re hailing from Owensboro. We love the little city anyway, because of ROMP. I’ve never seen anyone play bass in that way before, but a little oddity was not surprising for the overall theme of the night. The guitar solos were amazing, and the Tokyo Police Club-esque vocals hit the right spots. My impression: Ted Tyro is just a few guys who want to jam, and they’re doing exactly that.

I had done a little bit of listening to Landlady before the show, and came across a couple of videos on YouTube that prepped me for the performance. Something that struck me was when Adam Schatz talked about the band’s formation on stage. When they can, they prefer to arrange themselves in a semi-circle so they can all be making eye contact and creating their own sense of unity. Not being a musician myself, I hadn’t thought much about how bands stood on stage. But now that I think about it, it’s usually the standard straight line across, with the drummer behind the scenes. Zbar’s stage isn’t really ideal for Landlady’s desired setup, but I could tell they had made a conscious effort to do the best they could, and I really like that, for some reason. As far as their music? Aubrey made a comment about how Brooklyn is one of the hippest parts of the country, and there’s a lot of really cool, kind of crazy music coming out of there (we’re thinking of you, Spirit Animal). Landlady falls perfectly into that category as well. While we wait for them to return to the ‘Ville, we’ll be listening often to our green see-through vinyl, and strongly encouraging friends to check them out. 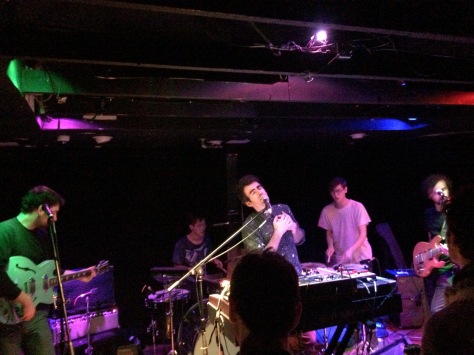